Sitting on the edge of the Thar desert, Jodhpur, popularly known as the Blue City, is steeped in history. The erstwhile capital of the Marwar, the city was established by Rao Jodha, a chief of the Rathore clan, giving the city the name of Jodhpur.

Jodhpur connected by air, road and railway from all major cities in India.

Jodhpur is the second largest city in Rajasthan but is relatively small and the tourist attractions can be covered in 2-3 days.

Mehrangarh Fort
Perched on a hill, Mehrangarh Fort is the landmark of Jodhpur. One of the largest forts in India, Mehrangarh rises 410 ft above the city, making it visible from almost everywhere throughout the city. The Fort was built by Rao Jodha as a residence for the royal family. Mehrangarh Fort has been pictured in many Hollywood and Bollywood movies too. 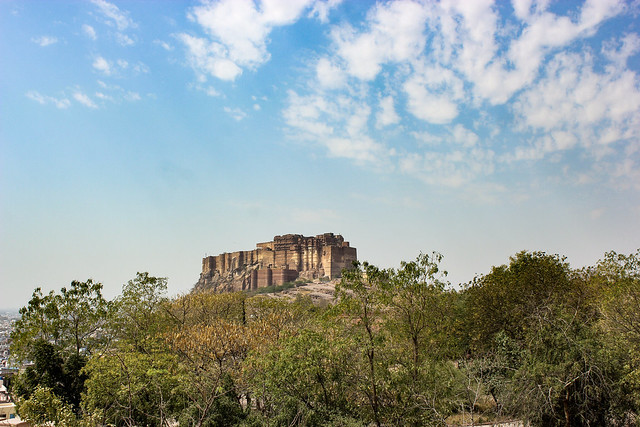 A visit to the Fort is free but you can see only a limited area. To enter inside and see the museum, there is an entrance fee of Rs. 100 for Indians and Rs. 600 for foreigners. There are audio guides as well as tourist guides at the Fort. The charges for the tourist guide depends on the number of people. Hiring a guide is recommended to understand the complete history of the Fort and the artefacts in the museum. Make sure you hire an official guide which are right outside the ticket window. There are separate still and video camera charges of Rs. 100 and Rs. 200 respectively, which isn’t too much considering the sheer amount of architecture and beauty one gets to capture. 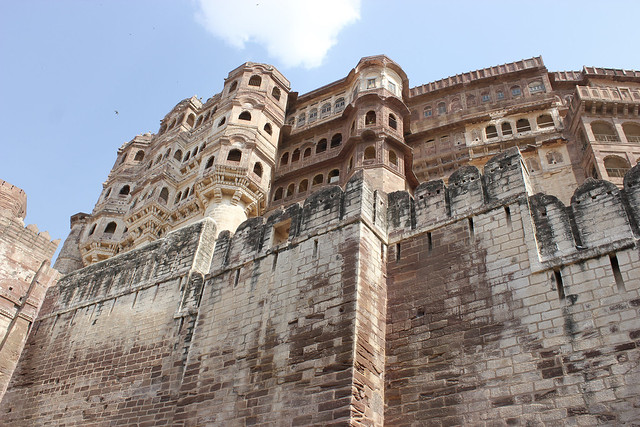 The museum has different galleries depicting history, arts and culture, and way of life of the rulers. Each gallery is fascinating to see and understand how the royals lived and fought. The gallery that houses the armoury that was used during wars with its history is gripping. 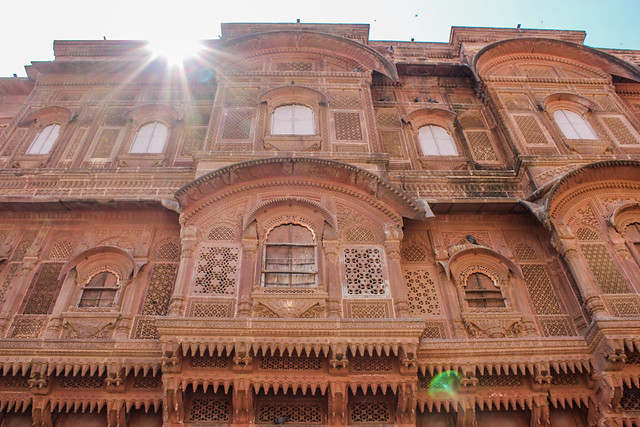 The top of the Fort offers panoramic views of the entire old and new city below. Many houses in the old city area are still coated in different shades of indigo blue making it a beautiful sight.

Inside the Mehrangarh Fort, there is also a gift shop to buy souvenirs. A little ahead of the shop are stalls by local artisans selling locally-made mojiris, sarees, jewellery and other trinkets.

An international company called Flying Fox conducts zip line activities from inside the Fort which passes over the old city.

Jaswant Thada
Maharaja Sardar Singh built this cenotaph in memory of his father, Maharaja Jaswant Singh II. It serves as a cremation ground for the royal family. Set amidst lush green trees, there is a lake with some ducks swimming in it and a garden around. 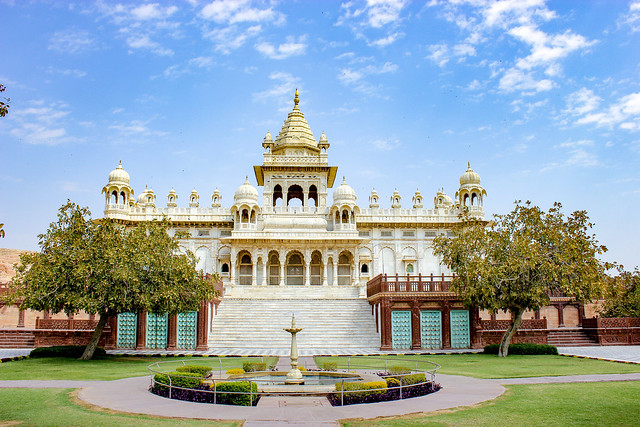 The strikingly white marble mausoleum is an oasis in the city, offering panoramic views of Jodhpur below and the Mehrangarh Fort. Once inside, its vastness provides a calm and comforting environment.

The entrance fee is Rs. 30 for Indians and Rs 50 for international visitors. There is so separate fee for camera.

Umaid Bhavan
The current residence of the royals, the palace gets its name after Maharaja Umaid Singh who commissioned it. The construction of Umaid Bhavan was completed in 1943. The Palace is perched on a hill a few km away from the main city. The magnanimous property is part residence and part luxury hotel. This is where Priyanka Chopra and Nick Jonas had their dream wedding 🙂 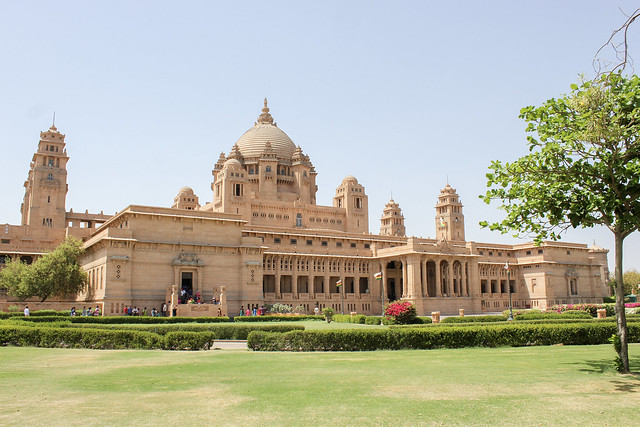 A small portion of it has also been converted into a museum. The museum has a vast exhibit of personal items of the royal family ranging from paintings, watches, cutlery etc. There is also a section detailing the architectural inspiration and history of the palace and Jodhpur. There is a small souvenir shop inside the premises too but the items are expensive.  The entry fee is Rs 30 for Indians and Rs 100 for foreign tourists.

Toorji ka Jhalra
As I had never seen a stepwell before, I did not want to miss an opportunity of visiting one. Stepwells were built in an ingenious way so women could have easy access to water all year round depending on the water levels. Legend says Toorji ka Jhalra, near the Mehrangarh Fort, was built by a Queen, consort of Maharaja Abhay Singh in the year 1740. 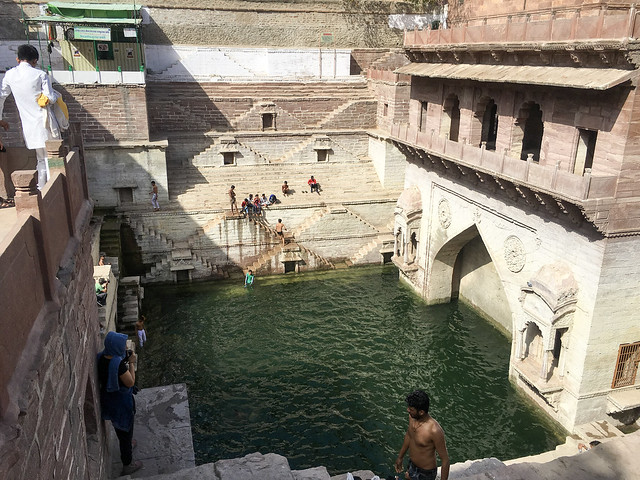 During my visit, locals were jumping and swimming in the water to beat the rising summer temperature.

Clock Tower/Ghanta Ghar
Built by Maharaja Sardar Singh, the Ghanta Ghar, or Clock Tower, is a famous landmark in Jodhpur. The Tower is lit up in the evening making it easily visible in the crowded maze of shops. 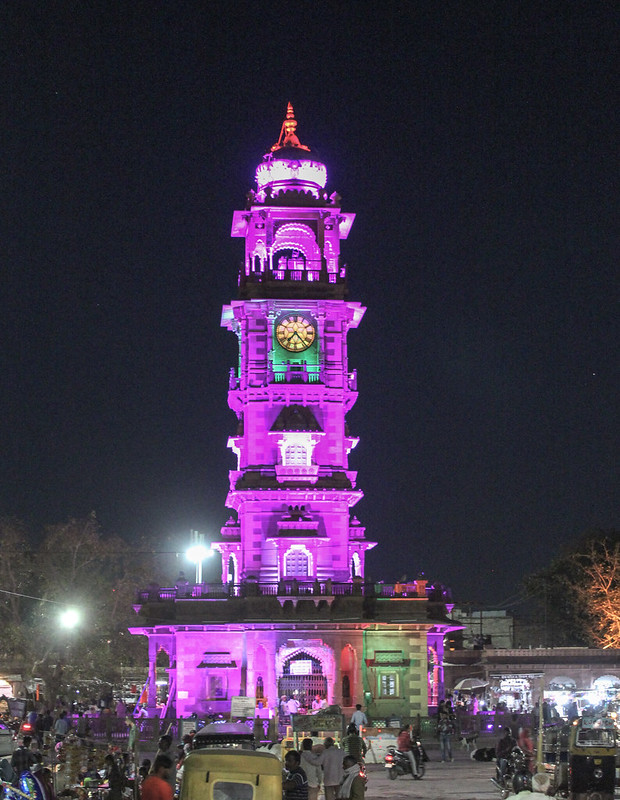 There is a shopping area surrounding the Tower and also outside it selling clothes, jewellery and other trinkets. There are many shops selling souvenirs too.

Mandore
Located approximately 9 km on the outskirts of Jodhpur city, Mandore is an ancient city that was once the capital of the Rathore clan, before Rao Jodha founded Jodhpur. 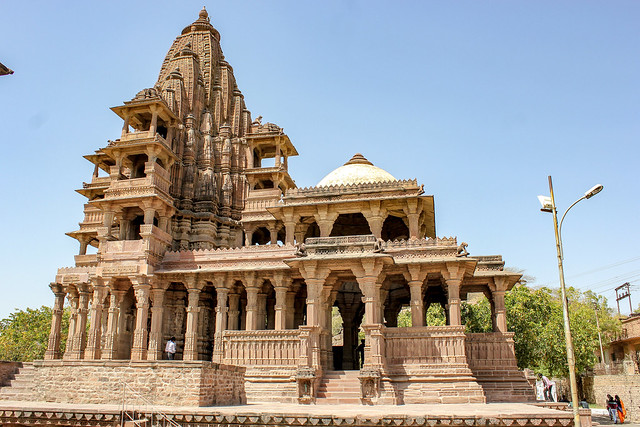 The Mandore Fort, now in ruins, is one of the major attraction. The Mandore Garden premises also are home to several temples and Dewals of the rules of Marwar. 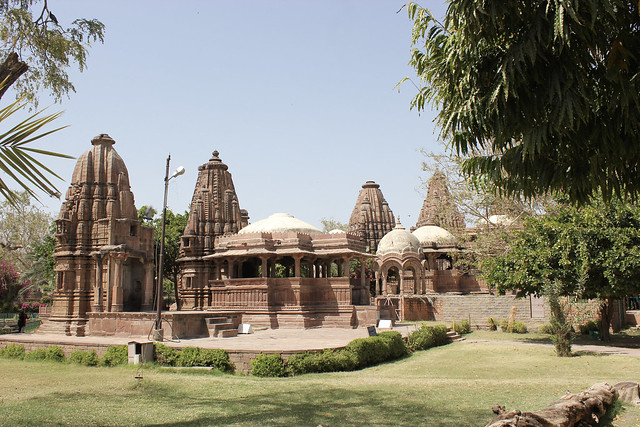 It served as a cremation ground to the royals and cenotaphs of rulers can be found here. There is also a museum depicting the history. The entrance fee for the museum is Rs. 20 for Indians and Rs 100 for foreign nationals. 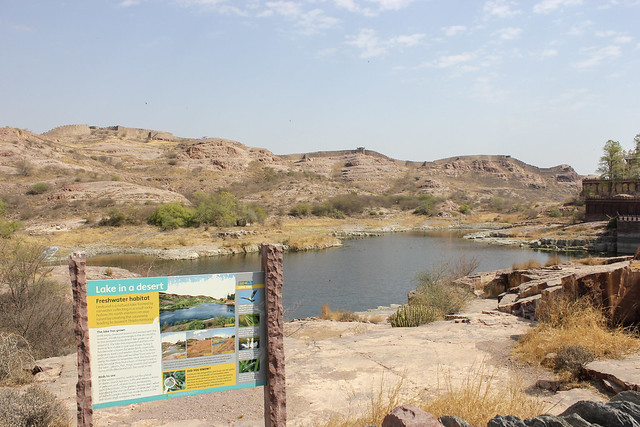 The park is open all year round and one can see different flora depending on the season of the visit. Not many people visit the park when they visit Jodhpur and if you are lucky you can have the entire park to yourself. The charges for entry are Rs 100 and one can hire a naturalist to guide and explain the various aspects for Rs. 200.

5 thoughts on “What to see and do in Jodhpur, Rajasthan”