A constant itch for a long drive turned into a road trip plan after we came across photos of Udaipur. Having taken road trips earlier, the 850 odd km drive did not seem unattainable. A couple of days later after having the car thoroughly checked and bookings done, my husband and I set out for the long drive that had eluded us. After the initial arguing over who will drive, I sat in the driver’s seat.

A roughly 10 hour journey that spanned three states saw my inhibitions turn into joy to cursing to being sleepy to a sense of achievement for having driven the entire stretch.

As we entered the city, it was well past sunset. The six lane highway turned to narrow roads. The smooth tarmac was replaced with a bumpy one. Where once there were trucks competing with each other on high beam turned to competition of constantly honking auto-wallahs. Tired after driving the whole day, we retired to our BnB immediately.

The morning after, we set off to explore the city. The erstwhile ruler of the Mewar Kingdom, Maharana Udai Singh shifted his capital from Chittor and founded the city of Udaipur amongst the Aravallis. The city remained the capital of the Mewar dynasty till its merger with India post independence. This ancient capital is historically and culturally rich and offers a deep insight into the lives of the Royals and the people of Mewar.

Most of the attractions are concentrated in the old city area and it is advisable to travel on foot.

Known as the city of lakes, Pichola and Fateh Sagar are two of the main.

To counter the famine and fulfil the fresh water needs of the residents, the lakes were artificially built. Named after Picholi, a nearby village, the Jag Mandir and Jag Niwas Palace are built in the middle of Lake Pichola. Constructed as a summer palace for the king, Jag Niwas is now a star hotel known as Taj Lake Palace.  In the middle of Lake Fateh Sagar is Nehru Park, a Public Park and Solar Observatory. Boating is available on both the Lakes for recreation as well as transport.

Situated on the bank of Lake Pichola, the City Palace is the official residence of the Royal family. Some part of it has been converted into a museum and the rest continues to remain as the official residence of the current Royal Family. Set aside at least half a day to gaze at the structure and admire the intricacy of the design. The museum is well maintained with signboards and information boards about the display artefacts. Hire an authorized guide to show you around and explain the history. A genealogy chart of Mewar kings mentions Shivaji Maharaj as a descendant of Mewar. A Light & Sound show is run in the evenings depicting the history of Mewar

Known also as Monsoon Palace, the Sajjangarh Palace was built by Maharana Sajjan Singh as a monsoon retreat. Perched atop a hill approximately 5 km from the main city, Sajjangarh offers a panoramic view of the entire Udaipur and the Aravallis. The Sajjangarh Wildlife Sanctuary surrounds the Hill and is open to public.

Built as a residential complex, the Haveli was left in depleted state post independence. Situated at Gangaur Ghat on the banks of Lake Pichola, the Haveli is a fine example of Mewari architecture. Recently restored and converted into a museum, it showcases the culture and heritage of the Mewari kingdoms and their lifestyle. In the evening, a cultural program with folk art and music is conducted. The Haveli is lit up at night and makes for a striking view.

Now converted into a star hotel, Jag Niwas or Lake Palace was constructed by Maharana Jagat Singh as his summer palace. Built in the middle of Lake Pichola, it has been voted as one of the most romantic hotels in the world. One can visit the Lake Palace only as a guest of the hotel. The Lake Palace found its popularity soaring after it was featured in a James Bond movie ‘Octupussy’ and later in several Hollywood and Bollywood movies.

Next to Jag Niwas, is Jag Mandir. Also known as Garden Palace, the Jag Mandir served as venue for Royal parties and as an asylum during battles. A plethora of flowers and tress adorn the Garden area along with fountains and pools. Few scenes of the Bollywood movie ‘Ye Jawani Hai Dewani’ were shot here. One can visit Jag Mandir from City Palace after paying a nominal amount.

A must visit for believers and non-believers alike. Situated on top of Machla Hills, the Temple can be reached by climbing the stairs or a ropeway. During sunset the Temple offers stunning views of Udaipur lighting up. 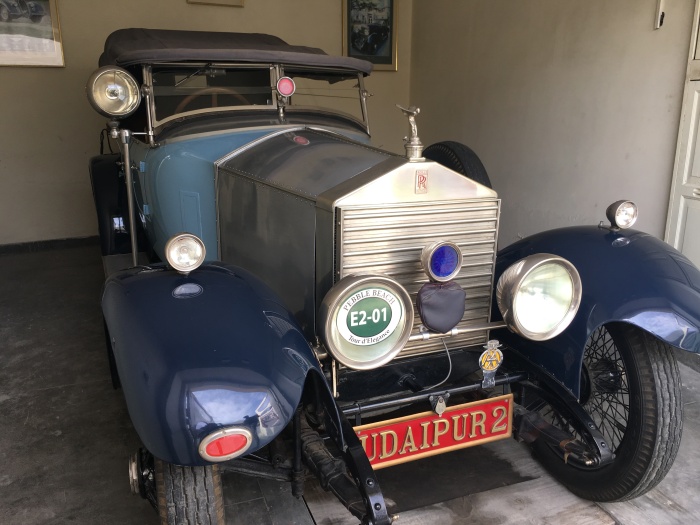 The Maharanas of Udaipur were known car aficionados. Over the years they collected and preserved the best of the motoring worlds. The collection is open to public for a fee. One can browse through the cars that range from Fords to Cadillac to Rolls Royce. All the cars are in working condition.  Must visit for all auto enthusiasts.

-Udaipur is well connected by road, rail and air from metros.

-It is not a desert region and has green cover.

-Parking is an issue in the old city area. If you are driving down confirm about parking arrangements with your host.

Udaipur being a major tourist destination, stay options are aplenty. From a cheap hostel to a five-star property, you can choose depending on your budget.

-The city sees a huge influx of national as well as foreign tourists. From local to international cuisine, everything is available. See if the place seems clean and get it.

-Some of the local favourites are Ambrai and Upre.

-The area just outside the City Palace is a shopping lovers’ paradise. Traditional ajasthani colourful designs adorn the streets. Bargaining is an important aspect as it mainly caters to tourists.

-The locals do their shopping at Hathi Pol which is cheaper.

Have you been to the City of Lakes? What else do you recommend?

*All pictures are clicked by me. Not even one by my husband.

We are all stuck at home. 🤘🏻 So many times I would wish that I could just stay home and do nothing. Laze around the whole day, maybe binge-watch. But it never happened. There was always something or the other that needed to be done. This ‘janata curfew’ seemed fun at first. Thought i’ll do nothing, just enjoy. But someone please give me something to do!!! I am going out of my mind!! 🤯 Oh, and I want to go back to Ladakh. If I have just sit and do nothing, i’d rather be in Ladakh. 🏔 . . . #TuggingMyLuggage #travel #janatacurfew #ladakh #leh #pangong #pangonglake #pangongtso #stuckathome #travelblogger
The gentle sound of the ocean, the waves lapping my feet and a book. All it need to be in paradise. ✨ With everything that is happening the world over, I can’t help but think about the places I have visited, and whether I will be able to revisit them ever again. ✨ Maldives - Paradise. Unfortunately, it is also one of the most affected places due to global warming and the rising ocean level. A few of the 1000+ islands have already submerged under water. It is estimated in the next couple of years, Maldives would be completely submerged. The govt is finding a way to sustain. They have also appealed to nearby countries, including India, to accept their citizens as refugee in a worst case scenario. ✨ Though I urge everyone to visit Maldives before it submerges, I also feel all of us should do our part in controlling global warming in every way possible and leave our paradise for our future generations. 🏝 For more pictures visit https://tuggingmyluggage.com/2014/07/19/maldives-a-photo-essay/ . . . #TuggingMyLuggage #Maldives #Ocean #Travel #travelgram #traveldeeper #passionpassport #instago #travellers #travelphotography #wanderer #wanderlust #travelblogger #traveldiaries #BeachLife #Beach #travelasia #climatechange #climatechangeisreal #clubmed #clubmedkani
GO FORWARD! Faster, faster, faster aaaand stop. 🙆‍♀️ February was a roller coaster ride. Birthday month began with hectic work commitments. I got food poisoning and it took me more than a week to recover fully. We also came to know about Nash’s condition shortly after. But in between all this, Jayesh and I managed to take a quick 2-day trip to Rishikesh on my birthday. The only plan was to white water raft on the Ganga. 🚣🏻‍♀️ I had been dreaming of this since a long long time and was ecstatic when we made it to Shivpuri, our starting point. (Un) Fortunately, it was only Jayesh and me in the raft along with 2 guides. Usually, one raft holds 8 people. I was petrified at the thought of just us being in there. Though I have white water rafted before in Dandeli, Kundalika and Trishuli in Nepal, the rush of going down in the Ganga, in an almost empty raft, was out of this world. ✨ The river, calm at times, and raging whenever she felt like, held her authority over us the entire time. She tested our strength and agility, she brought out our weaknesses. She made us feel slow, gushing around us at break-neck speed, taunting us to catch up with her. And when we did manage to catch up, she embraced us, calmly, almost in a loving, motherly manner. A few minutes later, she was back to her old self, making us lose our breath, and relishing in our humanness. We were, and are, nothing in front of her might. 🌊 We did make it to our final destination a few hours later with a lot of ups and downs, (literally!) hoping we have washed away our sins in the process. ✨ . . . #TuggingMyLuggage #Ganga #ganges #rishikesh #uttarakhand #travel #travelblogger #whitewaterrafting #rafting #jaimaaganga